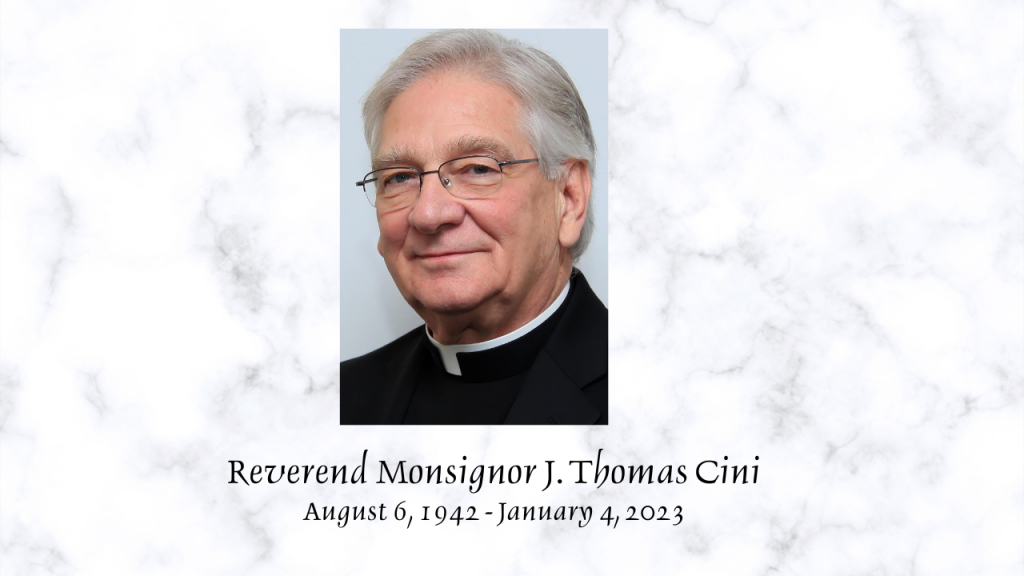 January 5, 2023 — (Wilmington, Delaware) — Reverend Monsignor (John) Thomas Cini, retired pastor of St. Ann Parish in Wilmington and long-time Diocese of Wilmington administrator, died on January 4, 2023, at the age of 80. Born in Wilmington and raised in New Castle, Delaware, Msgr. Cini was the son of John T. and Elizabeth (Wright) Cini.

“The Catholic community of Delaware and Maryland’s Eastern Shore owes a debt of gratitude to Msgr. Cini,” said the Most Reverend William E. Koenig, Bishop of the Diocese of Wilmington. “As chief administrator, Msgr. Cini guided the diocese through good times and challenging times with efficiency and grace. He will be remembered for his brilliant mind, unparalleled work ethic and pastoral heart.”

“Monsignor Cini was a great friend and mentor,” said the Reverend Monsignor Steven P. Hurley, diocesan Vicar General and Moderator of the Curia. “He was a priest, through and through, a man of wisdom and compassion, who lived a life of loyal service to the Lord. He was also intensely devoted to his family and friends. His wise counsel was sought by many.”

After his ordination to the priesthood on May 4, 1968 at the Cathedral of St. Peter in Wilmington, by Bishop Thomas J. Mardaga, he was assigned as associate pastor of St. Elizabeth Parish in Wilmington.

Recognizing his intellect and talent for administration, Bishop Mardaga appointed the young Father Cini as principal of St. Elizabeth High School in 1970.  In 1972, he was named the principal of the new diocesan high school, St. Mark’s, where he served for five years. In 1977, Father Cini was appointed Episcopal Vicar for Administration for the diocese. He was named Domestic Prelate of Honor to Pope John Paul II, with the title of Monsignor, in 1992. In 1996, Bishop Michael A. Saltarelli named him Vicar General for Administration and Moderator of the Diocesan Curia. He retired from administration in 2014 but remained an advisor to the bishop.

In addition to his diocesan responsibilities, from 2003 until 2012 Msgr. Cini served as pastor of St. Ann Church in Wilmington, a position that he loved dearly.

A viewing for Monsignor Cini will be held at St. Elizabeth Church, Cedar and Clayton Streets, Wilmington on Sunday, January 15 from 2:00 – 4:00 p.m. An additional viewing will be held at St. Elizabeth Church on Monday, January 16 from 9:30 – 10:45 a.m. Bishop Koenig will preside at a Mass of Christian Burial, at 11:00 a.m., immediately followed by interment in All Saints Cemetery. The Mass will be live-streamed on the diocesan YouTube channel – www.YouTube.com/DioceseofWilm.

In lieu of flowers, donations in memory of Reverend Monsignor J. Thomas Cini may be made to Vision for the Future (Diocese of Wilmington Education Trust Fund), P.O. Box 2030, Wilmington, DE 19899-2030