October 4, 2021 — (Wilmington, Delaware) — The Reverend Monsignor Joseph Francis Rebman, retired pastor of St. Joseph on the Brandywine parish in Greenville, Delaware, and former diocesan administrator, vicar general, judicial vicar, and chancellor for the Diocese of Wilmington, passed away on October 3, 2021. He was 85 years old.

“The Catholic community of Delaware and Maryland’s Eastern Shore owes a debt of gratitude to Msgr. Rebman,” said the Most Reverend William E. Koenig, Bishop of the Diocese of Wilmington. “His many decades of unparalleled service to the Church on every 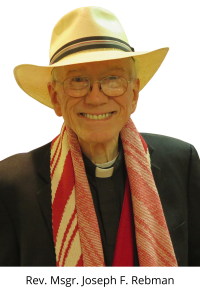 level, as well as his constantly cheerful disposition, are an inspiration to us all.”

Born and raised in Wilmington, he attended St. Peter’s Cathedral School and Salesianum High School. He studied at Saint Charles College and Saint Mary’s Seminary in Baltimore, the North American College and Gregorian University in Rome, and the Catholic University of America in Washington, D.C.

Ordained to the priesthood in 1960, Msgr. Rebman served as associate pastor at Immaculate Conception in Elkton, Maryland; St. Mary of the Assumption in Hockessin; Church of the Holy Child in Wilmington; and St. Joseph on the Brandywine in Greenville, Delaware. He served as administrator of St. Thomas the Apostle in Wilmington for a time in 1979 and for St. Peter Cathedral for a time in 1998. He was appointed pastor of St. Joseph on the Brandywine in 1999; a post that he held until his retirement in May 2021.

In 1967, Msgr. Rebman was assigned to full-time ministry in the Diocesan Tribunal where he held the positions of advocate, defender of the bond, judge and judicial vicar.

In 1969, he was appointed vice chancellor and in 1974, became chancellor; the next year he was named Honorary Prelate, with the title of Reverend Monsignor, by Pope Paul VI.

In February of 1995, when then diocesan Bishop Robert Mulvee was assigned as Coadjutor Bishop of Providence, Rhode Island, Msgr. Rebman was elected by his peers to serve as Diocesan Administrator. He held that position until Bishop Michael Saltarelli was named the eighth Bishop of Wilmington in January 1996. In 1996 he was appointed Vicar General for Pastoral Concerns.

During his years of ministry, Msgr. Rebman served on many diocesan boards, committees, councils, and commissions. Active in cemetery ministry throughout his priesthood, he served as Director of Catholic Cemeteries of the Diocese of Wilmington for many years and served as president of the National Catholic Cemetery Conference from 1978 until 1980.

Known for his always positive attitude, Msgr. Rebman would often greet people with, “Peace, love and joy!” and conclude a conversation with, “God loves you.”

Mass of Christian Burial will be celebrated by Bishop Koenig on Tuesday, October 12, 2021 at 1 p.m. at St. Elizabeth Church. The Most Reverend John O. Barres, Bishop of Rockville Centre, New York, will serve as the homilist. The Diocese will live-stream the Mass at www.YouTube.con/DioceseofWilm. Burial will follow immediately after the Mass at All Saints Cemetery, 6001 Kirkwood Highway in Wilmington.