Please help the Cathedral of Saint Peter in Wilmington by your generous donation. 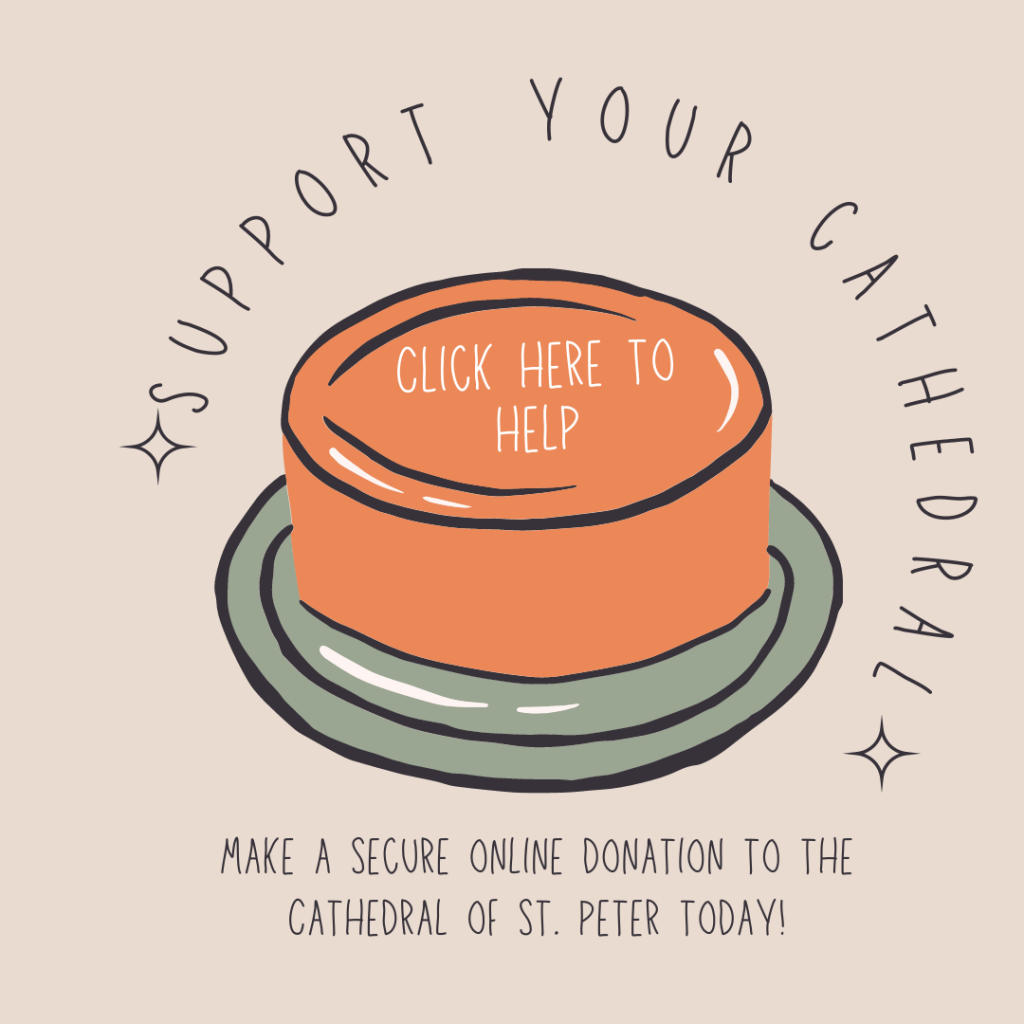 If you would like to give a one-time or ongoing gift directly to the Cathedral of Saint Peter in Wilmington, please click here. 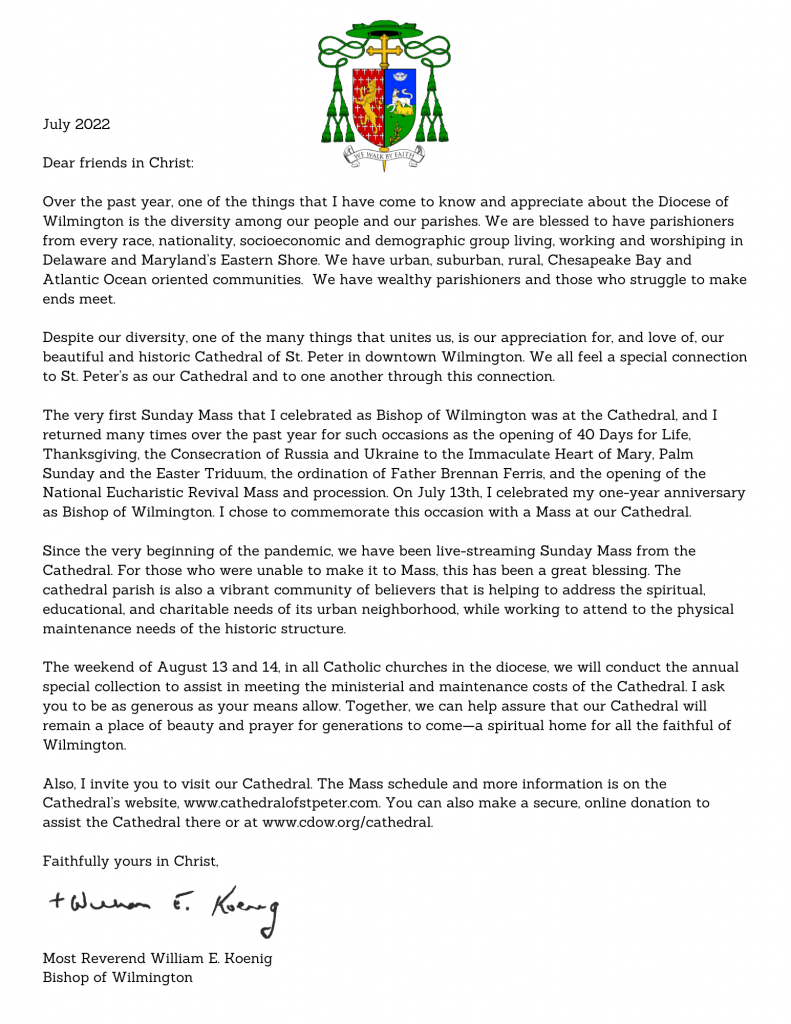 We thank you for your support.

You can see Sunday Mass live-streamed from the Cathedral every Sunday morning at 9:30 on the Diocese of Wilmington’s YouTube channel – www.YouTube.com/DioceseofWilm.

Most histories tell us that the first Masses in Wilmington were celebrated in the 1790s when French refugees arrived from Haiti. But Catholicism had made its appearance a decade earlier than that during the Revolutionary War. French Soldiers in 1782 were billeted in the Wilmington Academy, roughly where the Grand Opera House now is. Catholic army chaplains said Mass there. Because the French were on the side of the Americans, the populace became a little more comfortable with Catholic practices. The four French soldiers who died during their stay in Wilmington were buried at Coffee Run with Catholic French Army Chaplains officiating.

The island of Saint Domingue erupted into a full-scale rebellion during the French Revolution, and many wealthy French land owners fled north to cities along the North American coast. Wilmington was one such safe harbor, and many French families set down roots in the developing city. A French priest named Reverend Etienne Faure arrived with them and, in 1796, began the first sacramental register of what is now the Cathedral Parish of St. Peter.

For decades, Wilmington’s Catholic community had either celebrated Mass in their homes or traveled to St. Mary of the Assumption at Coffee Run. More than two years after land was leased for the construction of St. Peter’s, on September 13, 1818, they were able to celebrate within the walls of their new church for the first time.

Irish immigrants also began to arrive in growing numbers during this time period as Wilmington’s industries flourished. Church attendance of those working for the DuPont Company in the early nineteenth century was so prevalent that employees could have St. Peter’s pew rents deducted directly from their pay. The early diversity of St. Peter’s parishioners provided by the French and Irish Catholics never homogenized as the parish continues to welcome a wide array of people with many different backgrounds.

In time, the Sisters of Charity in Emmitsburg, Maryland were enlisted to help the orphans of Wilmington. Becoming the first group of religious women in Delaware, the Sisters, known as the Daughters of Charity, arrived in 1830 to assume charge of Wilmington’s orphanage at 3rd and West streets. Shortly thereafter, they moved to the northwest corner of Sixth and West, establishing both a day school and a boarding school for girls to accompany the orphanage. While the boarding school closed around 1850, the day school would eventually become the Saint Peter Cathedral School, currently situated on Sixth and Tatnall Streets.

With the flood of mid-nineteenth century immigrants, the number of Catholics in the Unites States was growing quickly. In 1868, Blessed Pope Pius IX carved out a new Wilmington Diocese that encompassed the entirety of the Delmarva Peninsula. On August 23 of that year, the Most Reverend Thomas A. Becker was installed as the first Bishop of Wilmington. St. Peter’s was identified as the diocesan seat and given the title of pro-cathedral.
Between 1870 and 1905, St. Peter’s went through a period of extensive enlargement and remodeling. The sanctuary and sacristy grew in size, and beautiful frescoes, stained-glass windows, and marble altars were installed. A cathedra and a barrel-domed roof were also added. Fresh off of these improvements, St. Peter’s was consecrated as a cathedral in 1905.

Church leaders and parishioners spent the next century growing as a congregation and as a community resource for those throughout Wilmington. All the while, they continued to maintain and improve the beauty and structural vitality of the Cathedral. Renovations took place in 1981, 1991, and 2007. During the work in 1991, twenty tons of the Cathedral structure were raised hydraulically (one twelve-thousandth of an inch at a time) to install a steel substructure for the pillars and choir loft.

For nearly two centuries, the Cathedral of St. Peter has stood at the corner of Sixth and West Streets in Wilmington, Delaware. From its perch atop Quaker Hill, it has seen the maturation of Delaware’s largest city; all the while it too has been growing and evolving. From a brick and tin roof structure measuring thirty by forty feet in 1818, St. Peter’s is now the center of Catholic life and culture for a diocese that spans the Delmarva Peninsula.

Taken from “Rejoicing in the Lord: Illustrated History of the Diocese of Wilmington”
Edited by Very Reverend Joseph W. McQuaide, IV.

Late historian George Callahan, takes you on a tour of the beautiful and historic Catholic Cathedral of Saint Peter in Wilmington, Delaware in this video from 2015.

Mr. Michael Davidson, Director of Liturgical Music for the Cathedral of Saint Peter in Wilmington, Delaware, conducts a tour of the Cathedral’s 1918 Austin Pipe Organ, including a visit to the instrument’s “Universal Air Chest” in this video from 2017.